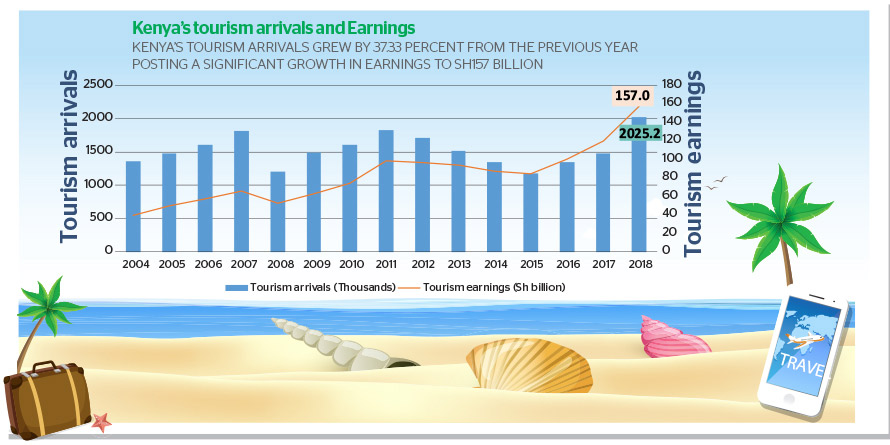 Kenya’s 2018 tourist arrivals grew by 37.33 percent from the previous year to cross the two million mark for the first time, posting a significant growth in earnings to Sh157 billion.

The earnings are an 31.2 percent improvement from the Sh119 billion earned in 2017, according to Tourism Cabinet Secretary Najib Balala.

The latest statistics show there were 2,025,206 tourists arriving compared with 1,474,671 international arrivals in the previous year.

The United States remained Kenya’s leading market, growing by 11.12 per cent with 225,157 arrivals.

“The gains of the sector were as a result of coordinated efforts between various arms of government, whom the tourism sector has engaged, as well as the concerted efforts in marketing Kenya as a destination of choice,” Mr Balala said, while releasing the tourism data at State House, Mombasa.

Mr Balala said a total of 3.9 million bed nights were taken up by Kenyans last year compared with 3.6 million in 2017.

While receiving the tourism performance report, President Uhuru Kenyatta encouraged private sector players to invest more in refurbishing their products and revamping tourism experiences.
“As part of enhancing repeat visits, as well as recommend the destination to other visitors. Kenya currently has a total of 68 global hotel brands, a clear indication that the international community is confident of returns in investment in the tourism sector,” said the President.
The president expressed his satisfaction on the overall achievement of the country’s foreign exchange earner saying it is a key sector that contributes substantively to the economy.

“Counties are key players and hosts of many tourism experiences, they should partner with government expert agencies, like the Kenya Tourism Board and collaborate with neighbouring devolved units to enrich the existing tourism circuits,” he added.

The president said the Sh460 Mama Ngina Waterfront is a key project that will be part of enhancing the coastal tourism experience.

The recreational facility is being upgraded and given a facelift to attain international standards.

Mr Balala attributed the gains made by the sector to coordinated efforts between various arms of government, marketing of Kenya as a destination of choice among other strategies.

“We engaged various government departments, concerted efforts in marketing Kenya as a destination of choice. Investment of the recovery funding has also helped in growing the sector,” he elaborated.

“The Arab Spring has affected them badly as well as areas like India and Thailand which have their own issues.

“Both Florida and Caribbean areas with the weather patterns changing, it has affected and people are now moving to Africa,” he elaborated on Sunday during a press conference at English Point Marina in Mombasa.